Get ready metal fans, we have the most exciting announcement of the year coming up!!! One of metals “Big Four,” Slayer, is on tour with support from the mighty Lamb of God & Behemoth! The terrible trio will headline the St Augustine Amphitheatre on Friday 21st July 2017 for a eardrum-wreckingly loud and insanely amazing concert that will leave you sore all over the next morning!! Sound good? We thought so too – and so does everyone else, so hurry up and grab those tickets before it’s too late!! 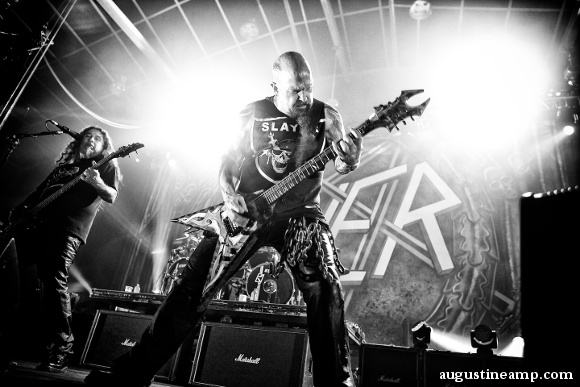 Cited as being one of the biggest metal bands alongside Metallica, Megadeth and Anthrax, few can hold a candle to Slayer when it comes to being an icon in metal!! Rising to fame with “Reign in Blood” in 1986, the band have gone on to blaze a trail in metal, closely followed by a frenzied, ever-hungry fanbase and smashing records with millions of album sales worldwide. Four of their 12 studio albums have been certified gold in the US, and they have won 2 Grammys out of a total of 5 Grammy Award nominations!

Lamb of God are equally huge in their own right, boasting record sales of almost two million in the United States, including one album certified Gold by the RIAA!! They have received two Grammy Award nominations, toured with Ozzfest twice, appeared at major festivals including Download and Sonisphere in the UK, Soundwave, Mayhem and Gigantour. Accompanying the two giants is occult Polish metal band Behemoth, with their own devilishly dark brand of death metal.

Don’t miss out on your chance to catch the trio of evil in all their glory – get your tickets NOW!!