Old Dominion comes to St Augustine Amphitheatre on Friday 30th November 2018 for a night of unforgettable entertainment! The ACM Award-winning five-piece will be playing venues all across North America this year, the band have called the stint their Happy Endings World Tour:

“We can’t wait to get out there and see what kind of Old Dominion fans we have around the world," says Old Dominion singer Matthew Ramsey in a press release. "It’s amazing when we hear from our fans out there, so we couldn’t be more excited to bring our music to them face to face.” 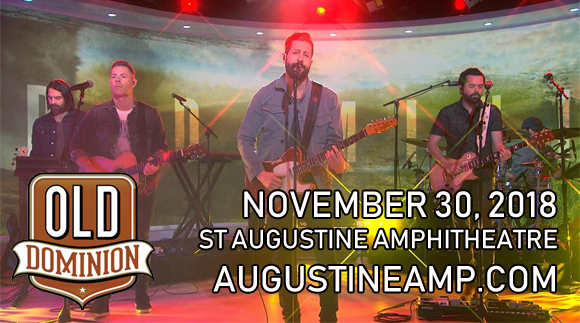 American country-rock five-piece Old Dominion first appeared on the music scene in 2014 with the release of their self-titled EP. Their debut studio album, Meat and Candy, was released in 2015 and launched the singles "Break Up with Him", "Snapback", and "Song for Another Time". Their second and most recent studio album, Happy Endings, was released in August 2017. In 2018, the group won the ACM Award for Vocal Group of the Year – their second ACM Award to date, having won the award for New Vocal Duo or Group of the Year in 2016.