Award-winning contemporary Christian music artist Lauren Daigle is throwing in some big surprises as she serves a series of praise and worship nights this fall. On her roster of shows this fall, Daigle is set to bring praise and worship to the stage at St. Augustine Amphitheatre on Thursday, November 3rd of 2022. She'll be singing her biggest praise hits such as "You Say" and "How Can It Be, along with some never-before-performed new songs. With her last record being 2018's "Look Up Child" which was massively successful, believers can watch out for big surprises from Lauren Daigle who may be set to drop new material very soon. So, the altar awaits your presence, joined by fellow believers at Lauren Daigle's praise and worship night. Book your tickets now! 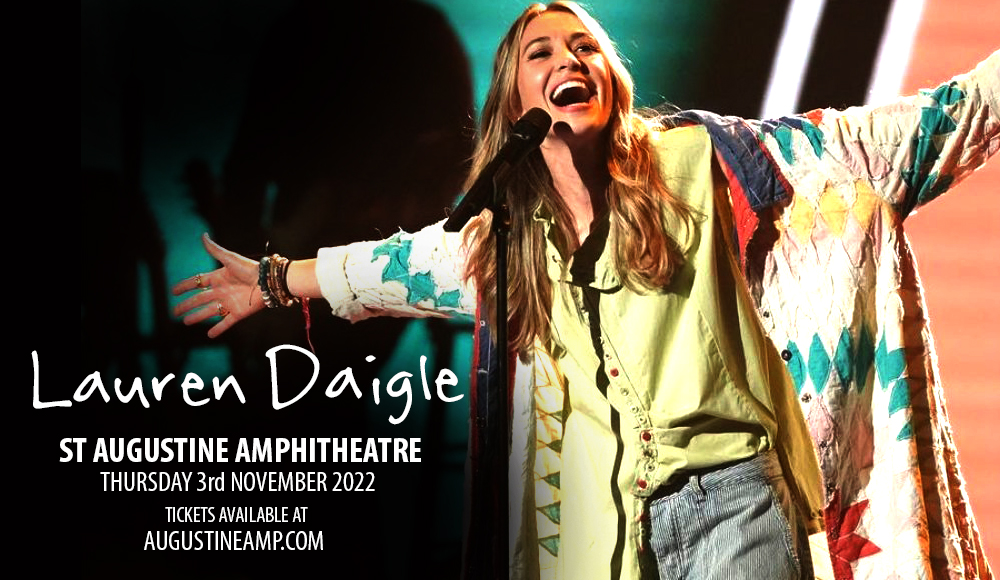 Amassing global acclaim for her contemporary praise and worship hits "How Can It Be", "Trust in You", "Look Up Child", "You Say", and many more, Lauren Daigle is set to bring praise and worship back to concert venues as she performs a series of shows this fall – including back-to-back nights at St. Augustine Amphitheatre.

She'll be performing her biggest hits, worship crowd favorites, and never-before-performed new songs live on stage. Since her 2018 record "Look Up Child" which featured her chart-topping hit, "You Say", Daigle is yet to officially announce her follow-up album. In 2021, she released two new songs, "Hold On to Me" and "Tremble". As heads right back to the live stage with hints of new songs that haven't been performed yet, fans can expect to be blessed with big surprises from the worship leader real soon.

"I'm excited to get back out on stage," Daigle shared. "Playing live is what it's all about for me – feeling the music, sharing the moment – just letting go. It'll also be fun to see how everyone responds to some of the new music we've been working on. It's going to be a blast!"

With her home in Louisiana called as "the music box" by her mother because little Lauren was always singing, her voice soon became a blessing for believers across the globe with her praise songs igniting faith, hope, and love. In 2015, she was named as a break-out artist in the Christian music industry for her debut album "How Can It Be" which hit #1 on the Billboard Christian Albums chart and the top 20 on the Billboard Top Albums chart. The record features her chart-topping singles "How Can It Be", "First", and "Trust in You".

In 2018, she dropped her sophomore record "Look Up Child" which brought her to soaring heights. The album features her hit single "You Say" which is certified 5x Platinum by the RIAA. The song spent 132 at the top of the charts – the longest one to do so for any genre of weekly Billboard Hot charts.

More of Lauren Daigle's biggest hits and worship crowd favorites include "Look Up Child", "Rescue", "Still Rolling Stones", "O'Lord", and "First". With a much-awaited new album still awaiting to be officially announced, Daigle dropped some new worship songs last year, the hit single "Hold On to Me" and "Tremble".

It's a perfect night to hold on to the faith and join other believers as the stage trembled to the sound of praise and worship at St Augustine Amphitheatre on November 3rd, with praise and worship led by the one and only Lauren Daigle. Book those tickets now!