Soulful pop-rock legends Daryl Hall & John Oates are coming to St Augustine Amphitheatre on Wednesday 9th November 2016 as part of the second leg of their US Tour! The groovin' twosome will be busting out all the hits from their illustrious career, and getting the crowd dancing all night long! Don't miss your chance to see these 80s icons live! 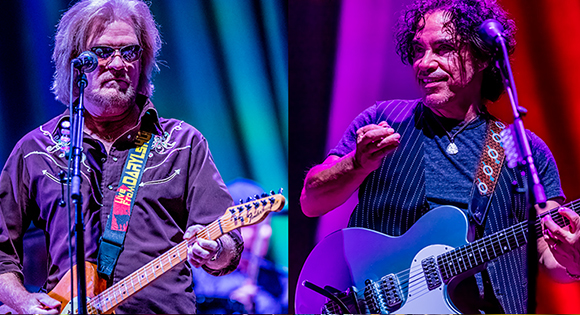 American musical duo Daryl Hall and John Oates, more commonly known as Hall & Oates, first met at the Adelphi Ballroom in Philadelphia in 1967 at a battle of the bands competition with their respective groups at the time. The show was interrupted when rival gangs opened fire on each other. They hid together in the same elevator and discovered that they were attending the same university and had a similar taste in music. As a duo, they were incredibly successful in the late 1970s to mid-1980s with their unique mixture of rock and roll and rhythm and blues, which they termed "rock and soul". Famed for the classic hits “Maneater”, “I Can't Go For That (No Can Do)” and “Kiss On My List”, Hall and Oates have racked up 18 studio albums in their career, which spans over four decades, with 11 certified as gold or above by the RIAA. 2003 saw their induction into the Songwriters Hall of Fame, and their induction into the Rock and Roll Hall of Fame came in April 2014. Billboard magazine placed Hall & Oates at No. 15 on their list of the 100 greatest artists of all time and the No. 1 duo.