Country maverick Brantley Gilbert is blazing a trail across the US this fall and he's headed to St Augustine Amphitheatre on Saturday 16th October 2021 as part of his postponed Fire't Up Tour! The Nashville artist had this to say on his feelings about his stint on the road with these tunes:

“I truly feel like we’re at the point that we can let the music take us where it is meant to go, so with every new album we like to change up our show and make it something that plays to those stories and characters,” Gilbert said in a statement. “We’ll of course still do the hits our fans love, but we are looking at this as an opportunity to turn up the heat a bit and give the songs on Fire & Brimstone a chance to really rock.” 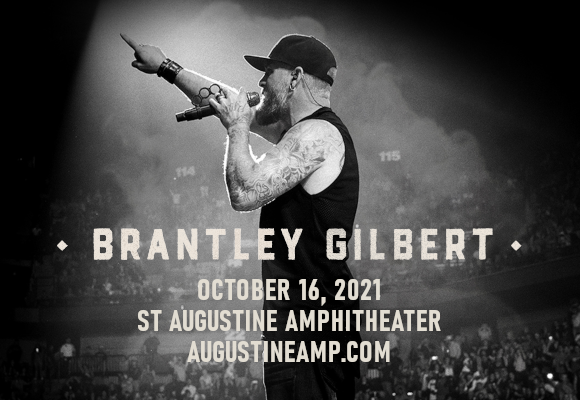 Before he was an artist in his own right, Nashville-based country performer Brantley Gilbert was known as the songwriter of hits including Colt Ford’s Grammy-nominated "Dirt Road Anthem" and Jason Aldean's "My Kinda Party", among others. In 2009, he made his solo debut with the album Modern Prodigal Son. His sophomore album, Halfway to Heaven, reached the top five on both the Billboard 200 and Top Country Albums Charts and number one on the Billboard Heatseekers Chart. The album also launched the singles "Country Must Be Country Wide" and "You Don't Know Her Like I Do", which both hit the top spot on the Hot Country Songs chart. Gibert’s third studio album, Just As I Am, reached number one on the Top Country Albums Chart and number two on the Billboard 200, and had two more number-one singles on the Hot Country Songs chart and reached number one on the Top Country Albums Chart. His fifth and most recent album, Fire & Brimstone, was released in 2018 and debuted at number nine on the Billboard 200.