Umphrey's McGee is coming to St Augustine Amphitheatre on Saturday 18th August 2018 for one unmissable night! Tickets are already flying as we get closer and closer to the LIVE event – grab yours today! With the success of previous tour dates, Umphrey's McGee have extended their summer dates to give their fans extra opportunity to be a part of it… so what are you waiting for?! 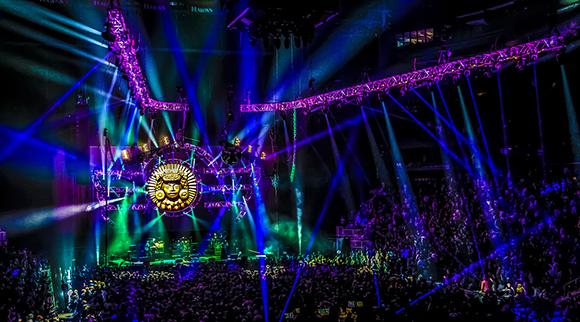 Umphrey's McGee have had an impressive career – performing in more than 100 concerts annually for 17 years, producing eight studio albums and online sales of over 3.5 million, it's no wonder fans across the globe get excited when this bands in town! Prepare yourself to be blown away by their monumental light displays and proficient musical ability in this groundbreaking performance!

With their comparisons to the Grateful Dead and Phish, due to their spontaneous, ad-lib feel, but musically akin to the prog rock greats like King Crimson, Umphrey's McGee are unique, experimental and impossible to pigeon-hole. By the tail end of their first year as a band, they had released their first live album, Songs for Older Women, and had adopted a large following in their local area, playing at house parties and colleges. Over the years they honed their improvisational skills and started playing further afield, making a name for themselves as a dynamic, prolific band with a dedicated following.

If you have the chance to catch them this summer at a venue near you – don't delay, these guys are definitely a must-see for not just Umphrey's McGee fans but music fans in general as they always showcase their pure talent and top musicianship each and every time!