EVENT CANCELLED. Please contact your ticket point of purchase to claim a refund on your tickets.

The Killers are bound to slay on the live concert stage coinciding with the announcement of the release of their brand spanking new album "Pressure Machine". The Killers are loaded with not one, but two albums in their armament as they were unable to tour last year in support of their 2020 album release ‘Imploding The Mirage‘. The Killers are hitting the stage of the St Augustine Amphitheatre on Friday 1st October 2021. Get locked and loaded with tickets as this show is definitely to die for. Tickets are available now! 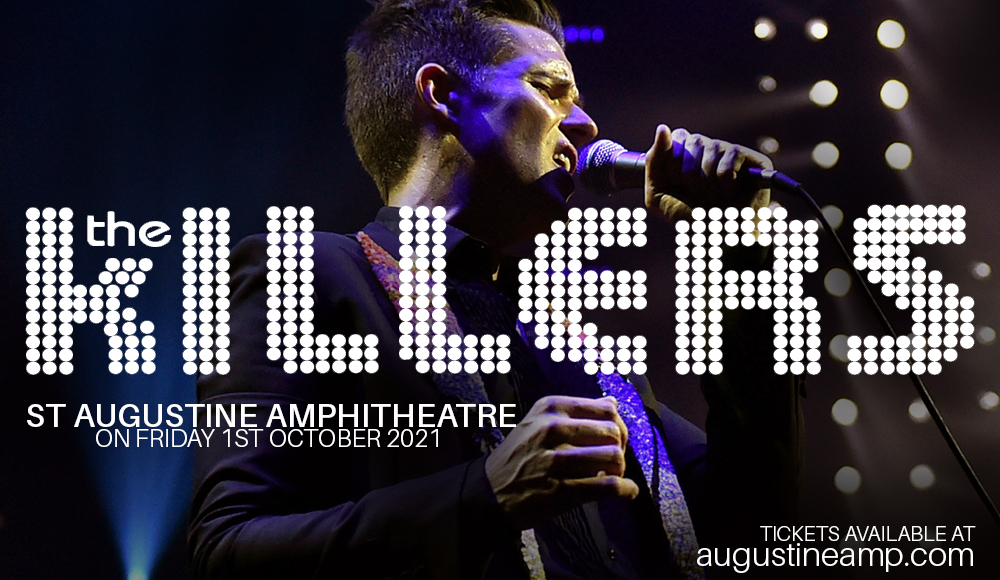 The Killers made it on the world map with their platinum debut and hitting number one in the United States, Australia, and Canada, which includes their biggest smash song "Mr. Brightside." Since then, their six consecutive album releases are certified chart-toppers: Hot Fuss (2004), Sam's Town (2006), Day & Age (2008), Battle Born (2012), Wonderful Wonderful (2017), and Imploding the Mirage (2020). They made history being the most successful act to ever emerge from Nevada, selling more than 28 million records worldwide, including 10.8 million in the US alone.

The Killers have a killer setlist (no pun intended) which include the hits "Somebody Told Me," "Jenny Was A Friend of Mine," "The Man," "Smile Like You Mean It," Runaways," "Read My Mind," "All These Things I've Done," "When You Were Young" and "Mr. Brightside"; and they're taking it up a notch as they unleash new tracks from the current albums ‘Imploding The Mirage‘, and the newly minted "Pressure Machine".

The new album spawned from the events that resulted in the cancellation of the tour. “It was the first time in a long time for me that I was faced with silence,” explains Flowers in a statement. “And out of that silence, this record began to bloom, full of songs that would have otherwise been too quiet and drowned out by the noise of typical Killers records.” Flowers continued: “I had a lot of time on my hands. Before I’d normally be gearing up to tour, all of that time has gone back into writing more songs. It’s been pretty fruitful.”

Now fans are getting a taste of those fresh fruits. Take a bite, but first, grab those tickets now!