If you missed Brad Paisley on his Weekend Warrior tour with Dustin Lynch, Chase Bryant & Lindsay Ell in 2017, you’re in luck!! The crew are reuniting for another run in 2018, giving you the chance to catch all these phenomenal country acts live in one amazing show! Just head on down to the St Augustine Amphitheatre on Saturday 10th March 2018 – book your tickets NOW for your chance you be there! 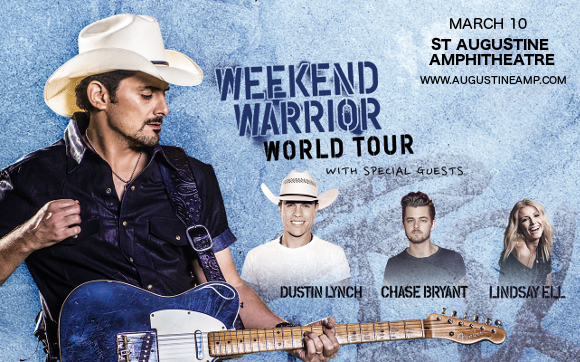 With his debut album “Who Needs Pictures,” in 1999, Brad Paisley saw no less than four hits on the Billboard country music charts, and the album has since gained Platinum certification. Since then, he’s become one of the biggest names in the world of country, setting a record in 2009 for most consecutive singles at the top of the Billboard Country Airplay chart (an incredible nineteen of them!!)

Get ready to see this country phenomenon live – get your tickets NOW!