Y'all better get ready… It's the return of the Wu-Tang Clan, and they will be putting it down hard at St Augustine Amphitheatre on Sunday 7th October 2018! The legendary hip hop group will be getting the crowd hyped with tracks from their most recent album Wu-Tang: The Saga Continues, plus classic Wu-Tang hits like "C.R.E.A.M.", "Gravel Pit" and "Bring Da Ruckus"! 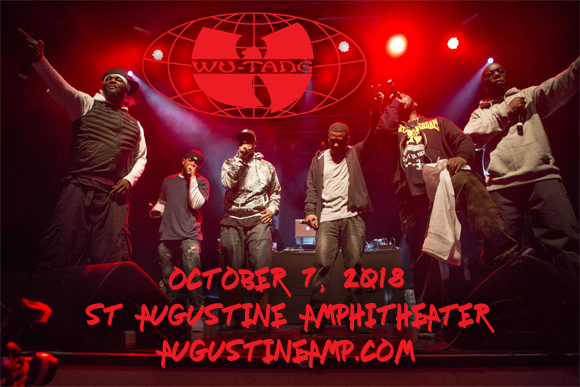 Originally composed of East Coast rappers RZA, GZA, Ol' Dirty Bastard, Method Man, Raekwon, Ghostface Killah, Inspectah Deck, U-God and Masta Killa, Wu-Tang Clan is an American hip hop group from Staten Island, New York City. Deemed by many as the greatest rap group of all time, Wu-Tang Clan has released four gold and platinum studio albums since it formed in 1991. The group's debut album, Enter the Wu-Tang (36 Chambers) (1993), is considered one of the greatest albums in hip-hop history. The group has been responsible for introducing and launching the careers of a number of affiliated artists and groups, collectively known as the Wu-Tang Killa Bees. Wu-Tang Clan's eighth and most recent studio album, The Saga Continues, was released in October 2017.