Host of the Daily Show and New York Times bestselling author Trevor Noah comes to St Augustine Amphitheatre on Saturday 16th March 2019! Noah will appear as part of his first ever arena tour, taking to the stage with a full set of all-new material, ready to take on the world's current political climate and more! Don't delay in ordering those tickets – this one will sell out before you know it! 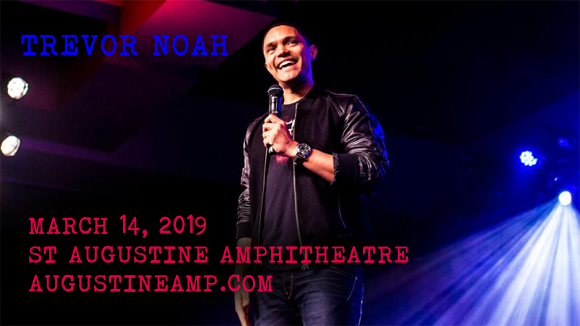 Named by Time magazine in 2018 as one of the 100 most influential people in the world, Trevor Noah is a South African comedian, writer, producer, political commentator, actor, and television host. In the early 2000s, Noah began his career in South Africa as a stand-up comedian and television host, hosting the educational TV programme Run The Adventure (2004–2006). Throughout the decade, Noah was the hosted several popular television programs and awards ceremonies, and he also featured as a contestant on Strictly Come Dancing's fourth series. In 2011, Noah moved to America and over the following years made a name for himself as the first South African stand-up comedian to appear on both The Tonight Show and on the Late Show with David Letterman. Noah's career began to take off internationally after that, with appearances on several other American talk shows, English panel shows and from starring in his own comedy specials. He began working on the Daily Show in 2014 as the Senior International Correspondent, and he replaced former host Jon Stewart the following year.