Indie rock giants Modest Mouse are headed to St Augustine Amphitheatre on Thursday 7th September 2017 as part of the second leg of their 2017 tour! The "Float On" crew will be performing hits from their most recent album, 2015's Strangers to Ourselves, as well as other songs from their two decade career – book your tickets now! 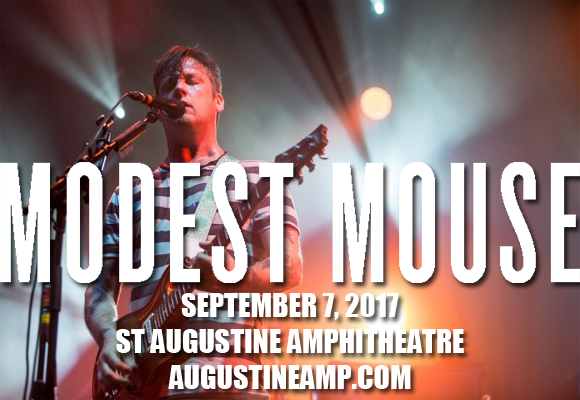 Formed in 1992, American alternative rock band Modest Mouse became quintessential poster-boys for 1990s indie rock with the release of their 1997 album The Lonesome West. The band has seen multiple changes in personnel throughout the years, with the band's founders, singer/guitarist Isaac Brock and drummer Jeremiah Green, remaining the most consistent members. The band's 2000 album, The Moon & Antarctica, received a 9.8 out of 10 Pitchfork review, but it was their fourth studio album, Good News For People Who Love Bad News (2004) that launched the band into mainstream recognition. The album launched the hit singles "Float On" and "Ocean Breathes Salty", and went on to be nominated for a Grammy Award for Best Alternative Music Album that year, as well as earning a Best Rock Song nomination for "Float On," as well as earning Platinum certification. Their most recent album, Strangers to Ourselves, was released in 2015.