With his smooth '60s soul sounds, Leon Bridges is an incredible live performer, and he's bringing his Good Thing Tour to St Augustine Amphitheatre on Wednesday 17th April 2019! Supporting the release of his album of the same name, Bridges will be bringing his vintage R&B vibes to the stage with his brilliant new material! He'll be joined in support by the incredible Jess Glynne in support – a British vocal powerhouse! It's going to be a great show! 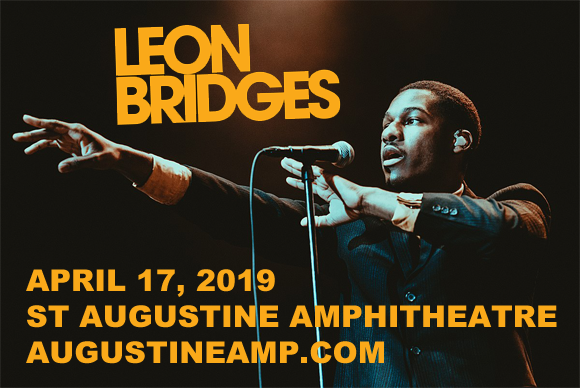 After years of performing open mics in his hometown of Fort Worth, Texas, American gospel and soul singer, songwriter and record producer Leon Bridges signed to Columbia Records in 2014. When it came to attracting Columbia's attention, Bridges had the help of guitarist Austin Jenkins and Joshua Block of White Denim, who aided him in recording demos for Soundcloud, using vintage recording equipment. His debut album, Coming Home, was released in 2015, preceeded by a single of the same name. The single peaked at number seven on the Billboard Triple A chart and became a Top 10 Most Viral Track on Spotify, and the album was nominated for Best R&B Album at the 58th Annual Grammy Awards. Debuting at number three on the Bilboard 200, Bridges' second studio album, Good Thing, was released in May 2018, supported by the singles "Bet Ain't Worth the Hand", "Bad Bad News" and "Beyond".