Heartland rock fans, get ready for the show of your life! The amazing John Mellencamp is teaming up with Emmylou Harris and Carlene Carter for a fantastic North American jaunt that will see them land at the St Augustine Amphitheatre on Saturday 24th June 2017 for a truly sublime performance! Don’t miss out – book your tickets now, while they last!! 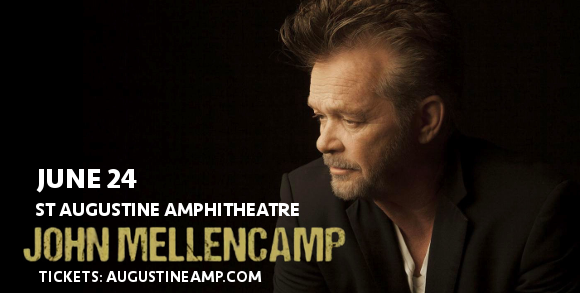 John J “Cougar” Mellencamp needs no introduction – as one of the biggest stars of the 80s, he rose to fame with his simple, catchy, yet emotive brand of heartland rock, with a string of Top 10 hits including "Jack & Diane," "Lonely Ol' Night," "R.O.C.K. in the U.S.A.," and "Paper in Fire,” to name just a few!! Nominated 13 times for Grammy Awards and an inductee of the Rock and Roll Hall Of Fame, he has been cited by many artists including country star Keith Urban as a hugely important influence, with Johnny Cash calling him; "one of the 10 best songwriters” in musical history.

John Mellencamp is now on tour with his fresh new album, the universally acclaimed “Sad Clowns & Hillbillies”. Be among the first to hear all the brand new material live – book your tickets to see John Mellencamp today!!