Get ready for the show of a lifetime! On Sunday 14th May 2017, the incredible Grammy-award winning John Legend will arrive at the St Augustine Amphitheatre!! Get ready for a night of the very best entertainment that money can buy! This is the show we've all been waiting for… Don't miss your chance to be see the legendary songwriter live in concert! Grab your tickets NOW! 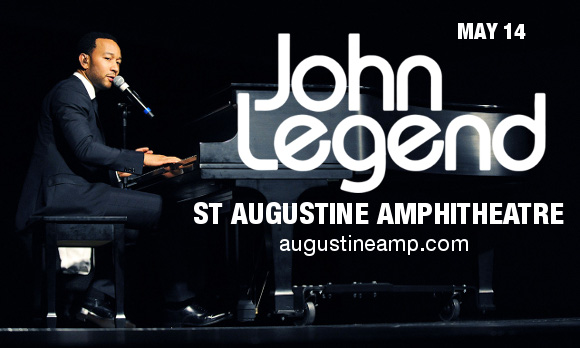 John Roger Stevens, stage name John Legend, was born and raised in Springfield, Ohio. From the tender age of four, he was performing with his church choir, and picked up the piano aged seven!! While in college, hewas president and musical director of a co-ed jazz and pop a cappella group named Counterparts. Following his graduation, he went on to produce, write and record his own music in 1999, and began sending his demo to various record labels. In 2001, Devo Springsteen introduced John Legend to the Kanye West, at that point at the beginnings of his career, hiring Legend to sing the hooks of West’s songs. In December 2004, John Legend release his first major label album, “Get Lifted”, featuring production by Kanye West, Dave Tozer, and will.i.am. It shot to number 7 on the US Billboard 200, and sold 116,000 copies in its first week!! The rest is history – John legend went on to collaborate with numerous big names including Lauryn Hills, Alicia Keys and Magnetic man as well as writing and releasing his own solo material.

What are you waiting for? Get your tickets to see John Legend today!!!