Legendary blues guitarist Joe Bonamassa comes to St Augustine Amphitheatre on Friday 10th December 2021 as part of his fall/winter tour! The singer-songwriter will be performing from his latest album, Royal Tea as well as fan favorites from his illustrious career of chart-topping albums! 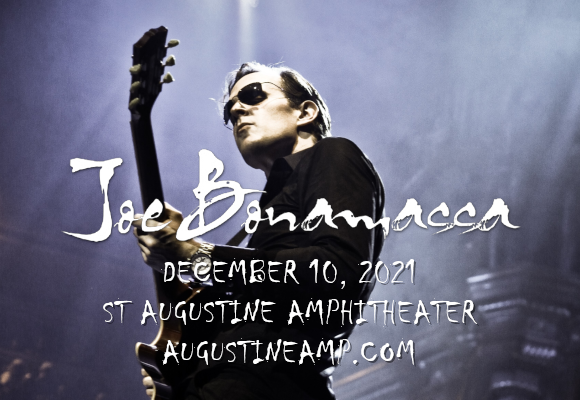 A prolific and singular talent, Joe Bonamassa is an American blues rock singer, songwriter and, primarily, guitarist. A virtuoso from a young age, he began performing professionally at 12 years old when he opened for blues legend B.B. King and before the age of 18, he was in a band called Bloodline with the sons of Miles Davis, Robby Krieger, and Berry Oakley. Frequently noted amongst the world’s best guitarists, Bonamassa has performed with many notable blues and rock guitarists over the years. Having released his debut solo album in 2000, he has released 15 studio albums to date, of which 11 have hit the top spot on the Billboard Blues charts. His most recent studio album is 2020’s Royal Tea and he released the live album and film Now Serving: Royal Tea Live From The Ryman on June 11, 2021, taken from his one-night-only concert at the historic Ryman Auditorium in Nashville, Tennessee.