Country Music Hall of Famer Emmylou Harris And Her Red Dirt Boys comes to St Augustine Amphitheatre on Friday, March 4th, 2022, with very special guest Dale Watson. Grab your tickets now and come on down to St Augustine, Florida for one incredible night with this absolutely legendary lady, with a staggering 26 studio albums under her belt as well as multiple live and compilation albums and loads of singles, this lady sure knows how to sing! So don’t miss out on one of the best acts, country music has ever had. 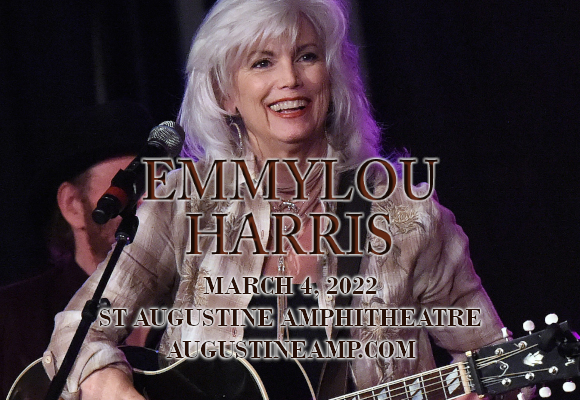 Emmylou Harris has released dozens of albums in her five-decade career. She’s collaborated with Gram Parsons, Dolly Parton and Willie Nelson among others, she has won 14 Grammys from 48 Nominations, 3 Country Music Awards, 2 ACM Awards, 5 International Bluegrass Music Association Awards, 4 Americana Music Association Awards, and the Polar Music Prize. In 1992, she became a member of the Grand Ole Opry, she was inducted into the Country Music Hall of Fame in 2008, and in 2018 she was presented the Grammy Lifetime Achievement Award.

Emmylou Harris has released 26 studio albums, including four albums of collaborations with other artists, four live albums, 11 compilation albums, 3 video albums, and 70 singles. In total, she has made 4 million record sales in the US alone. Her most successful chart album was the 2011 album, Hard Bargain, debuting at number 3 on the Billboard Top Country Albums and number 18 on the Billboard 200.

Red Dirt Boys is the name Emmylou Harris gave to her back-up band made up of Chris Donohue, Will Kimbrough, Phil Madeira, and Bryan Owings. They approached Emmylou and asked if they could use the name on their upcoming record, she said, "Only if I can sing on it". Their debut album, Credits, released March 25, 2020.