Respected singer and musician, and captivating performer Bonnie Raitt comes to St Augustine Amphitheatre on Saturday 29th October 2016 for a night of electrifying music that will leave you tingling… Touring in support of her twentieth studio album, Dig In Deep, Bonnie will be performing at a string of shows across North America! The Queen of Blues will be performing songs from Dig In Deep as well as many fan favorites – don't miss out!!! 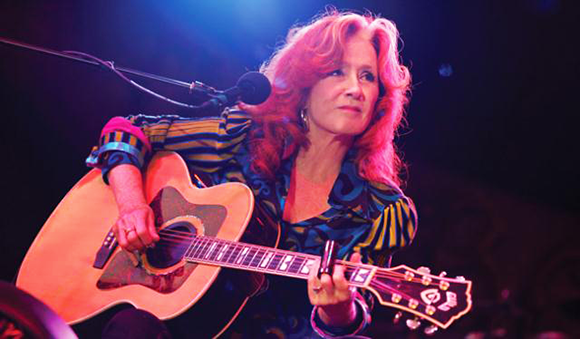 American blues musician Bonnie Raitt began her music career in the 1970s, fusing components of rock, blues, country and folk to create her roots-influenced signature sound. Having signed to Warner Brothers, Raitt released her self-titled debut album in 1971. Despite her first few albums receiving critical acclaim, and the reputation she gained for her impressive live performances, Raitt didn't have her commercial breakthrough until she released 1977's Sweet Forgiveness. Raitt saw a resurgence in her commercial success in 1989 with her return to public prominence after the release of her album Nick of Time. Luck of the Draw (1991) and Longing in Their Hearts (1994) were also multi-million sellers generating several hit singles, including "Something to Talk About", "Love Sneakin' Up on You", and the ballad "I Can't Make You Love Me". Raitt has received 10 Grammy Awards, is listed as number 50 in Rolling Stone magazine's list of the 100 Greatest Singers of All Time and number 89 on their list of the 100 Greatest Guitarists of All Time.