For some time, stages have been quiet, and seats remained empty brought about by the pandemic. 'But if you close your eyes, does it almost feel like nothing changed at all? Well, it's time to open those eyes as live music is back, with Bastille hitting the stage at St. Augustine Amphitheatre on Friday, 3rd December 2021. Having sold more than 11 million records worldwide, the band is known for its multi-platinum hits such as "Pompeii" and "Happier" with Marshmello. Bastille dropped new singles "Distorted Light Beam", "Give Me The Future", and "Thelma + Louise" this year, giving fans a taste of the band's upcoming album. Don't miss out on jamming and singing along to your favorite hits with Bastille performing live on stage. Live music is back! Book your tickets now! 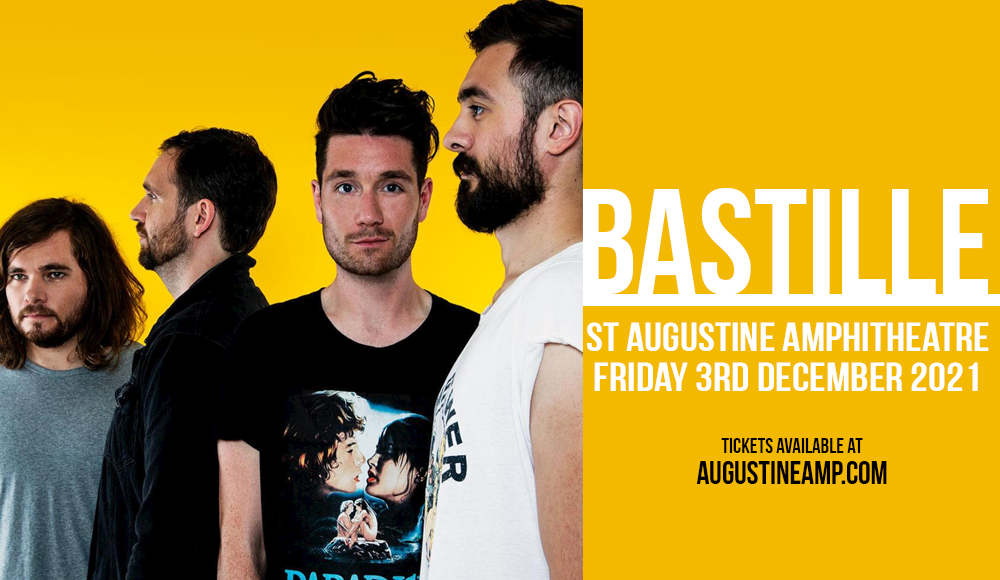 Bastille entered the music scene in 2010 with band members Dan Smith, Kyle Simmons, Will Farquarson, and Chris "Woody" Wood, catching the attention of Alex Baker, presenter of independent artists on Kerrang! Radio, when one of the 300 copies of their debut tracks fell into his hands and started supporting the band on the air. By 2011, they released their first EP, Laura Palmer, then later that year, signed with Virgin Records.

In 2012, they dropped their first single with Virgin, "Overjoyed". The following year, they released their multi-platinum hit single "Pompeii" reaching #2 in the UK and #5 in the US. Their first album, Bad Blood, hit the top of the UK Albums Chart. The band's single "Of the Night" is also certified platinum and hit # in the UK Singles Chart.

"Wild World" is the band's second album, also hitting #1 in the UK in 2016 featuring the certified platinum single "Good Grief", certified silver "Send Them Off", and "Blame". In 2018, they released their multi-platinum hit single "Happier" with Marshmello, reaching #2 in the UK and US charts.

The band's third album "Doom Days" came out in 2019 with singles "Quarter Past Midnight", "Doom Days", and "Joy". With three new singles dropped this year (2021), the band is giving fans a taste of their much anticipated fourth studio record. Smith says "..But now, I guess, I feel more liberated than ever", as he talks about collaboration and their creative work on their album.

'Does it almost feel like nothing changed at all? Bastille is back, stronger and more liberated than ever. They're making new music, and are back to perform live on stage. Book your tickets now!