Overnight sensation and soulful roots rock band Alabama Shakes are on tour again, promoting their six-time Grammy-nominated album Sound and Color! Fronted by passionate powerhouse Brittany Howard, the fiery Southern rockers comes to St Augustine Amphitheatre on Saturday 30th April for a night of fierce and incomparably rousing music! And with support from Louisiana singer-songwriter Dylan LeBlanc, it's a show not to be missed! 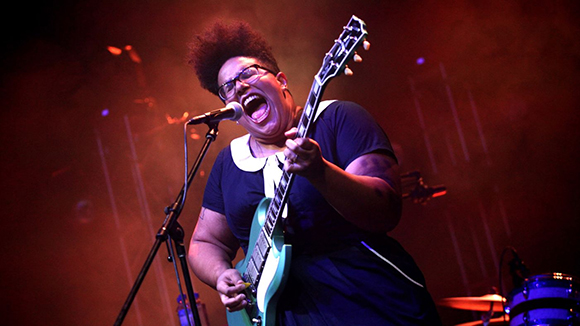 Started in Athens, Alabama in 2009, Alabama Shakes are a Southern rock band formed of lead singer and guitarist Brittany Howard, guitarist Heath Fogg, bassist Zac Cockrell, keyboard player Ben Tanner, and drummer Steve Johnson. The result of twice-weekly jam sessions Howard held in her great-grandparents' former home, the band performed at bars and clubs around the Southeast for two years while perfecting their sound and crafting their songs. They began recording their debut album at Tokic's Bomb Shelter in Nashville throughout 2011, funding the recordings themselves. Their first breakthrough came when SiriusXM host and Los Angeles music blogger Justin Gage contacted the band asking for a demo, after he found a photo of Howard performing online. He then posted an MP3 of their song "You Ain't Alone" on his music blog, Aquarium Drunkard, and by morning the band was inundated with offers from record labels and management companies. They signed to ATO in 2011 and began to open for the Drive-By Truckers. Their debut full-length album Boys & Girls, was released in April 2012, debuting at number 16 on the national charts as a digital-only release, and climbing to number eight as physical releases were distributed. The album received near-universal acclaim, and its hit single, "Hold On" was nominated for three Grammy Awards. The band released their second album, Sound and Color, on April 21, 2015. The album debuted at number one on the Billboard 200 in the U.S., and received six Grammy nominations, including Album of the Year.